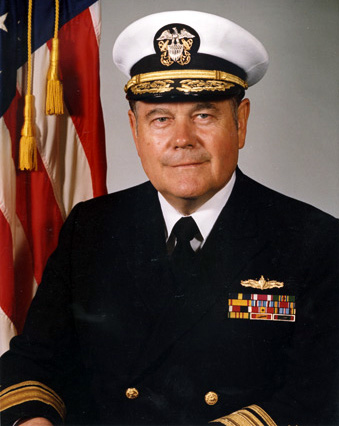 Admiral Meyer is known as the “Father of Aegis,” the revolutionary combat system now standard in U.S. Navy surface warships for air and missile defense. Meyer grew up during the Depression on a farm near Brunswick, Missouri. He enlisted in 1943 when he was 17 years old and was commissioned through the Naval Reserve V-12 officer training program at the University of Kansas. His initial assignment as an ensign was to begin his postgraduate education at the Massachusetts Institute of Technology (MIT). His first tours of sea duty were in the destroyer Goodrich (DD-831), 1947–48; the light cruiser Springfield (CL-66), in 1948–49; and the destroyer tender Sierra (AD-18), 1950–51. In 1951–52 he attended Guided Missile School at Fort Bliss, Texas, and from 1952 to 1954 taught at the Nuclear Weapons School in Norfolk, Virginia.

After being a student at General Line School, Monterey, California, in 1954–55, Meyer served in 1955–56 as executive officer of the radar picket destroyer escort Strickland (DER-324) and 1956–58 on the staff of Commander Destroyer Force Atlantic Fleet (DesLant). He attended the Naval Postgraduate School, 1958–60, and did further postgraduate work at MIT, 1960–61. His final shipboard tour was in 1961–63 as fire control officer and weapons officer in the guided missile cruiser Galveston (CLG-3). From there he reported to the Surface Missile Systems Project in Washington, D.C., 1963–67, and served 1967–70 at the Navy Surface Missile Systems Engineering Station (NSMSES), Port Hueneme, California.

RADM Meyer’s longest tenure, 1970–83, was in the Advanced Surface Missile System, which became Aegis. From 1976 to 1983 he was project manager for the Aegis Shipbuilding Project in the Naval Sea Systems Command. His final tour of active duty, 1983–85, was as NavSea-06, Deputy Commander for Weapons and Combat Systems. Following retirement from active naval service, he continued to work in Aegis-related activities.