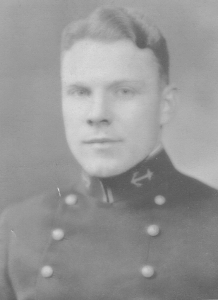 Floyd Bruce Parks was born in Salisbury, Missouri on January 16, 1911, the first child of James B. Parks and his wife Elizabeth “Bess” Ann Bowman. Floyd had a younger brother, Billy Bowman Parks, who was also a Naval Aviator during WWII. Their father died in 1924 leaving their mother a widow.

Floyd Parks enlisted in the United States Navy in 1928 and served two years aboard destroyers. In 1930 he received an appointment to the United States Naval Academy. He earned the infamous Black “N” award, given for major infractions, on a number of occasions. He sang in the Midshipman Choir and was a member of Annapolis’ water polo team, also participating in football and swimming. Parks graduated in the upper third of his class of 1934 and chose a commission in the United States Marine Corps. He was appointed a Second Lieutenant on June 1, 1934 and assigned to the Philadelphia Navy Yard for a year before serving on the cruiser USS Astoria (CA-34). In May 1936 he reported to the Naval Air Station in Pensacola for flight training. While swimming in the Gulf of Mexico, Parks and an enlisted man rescued a marine private from drowning, winning commendation for his “quick action, good judgment and swimming ability.”

Parks was designated a Naval Aviator on June 12, 1937 and in August reported to Naval Air Station, San Diego, California. The following year he married Margaret Elizabeth Murray of El Paso, Texas. In June 1940 he was reassigned to the NAS Pensacola as a flight instructor. In May 1941 he transferred to the First Marine Aircraft Wing, Fleet Marine Force, Quantico, Virginia and trained as a dive bomber pilot. He remained in that assignment until March 1942 when he joined the Second Marine Aircraft Wing in San Diego for deployment to Midway.

He was promoted to the rank of Major on May 8, 1942 and given command of Marine Fighting Squadron Two Twenty One (VMF-221) during the Battle of Midway. Parks’ squadron was predominately equipped with older planes, nineteen Brewster F2A (Model B-439) fighter aircraft, supplemented by five Grumman FAF-3 Wildcats and seven Buffalos all handed down from U.S. Navy squadrons. More than half of the Marine Aviators assigned to Parks’ unit were fresh from flight training in San Diego.

During the Battle of Midway, Parks was killed in action on the first day of the battle on June 4, 1942 while leading his squadron against a superior force of 100 Japanese fighters and bombers attacking the island. The Marine fighters peeled off and roared into the Japanese formation all guns blazing. Several bomber were hit and dropped away toward the sea. But then the Zeroes saw what was happening and attacked the slower Marine planes and the pilots didn’t have a chance. The rest of the Marine planes joined Major Parks from Midway. After the all clear was sounded on Midway, the Midway Airfield radio called “All fighters land and refuel by divisions.” No fighters landed. Later only ten planes would return and only two would ever fly again. For his heroism, Major Parks was posthumously awarded the Navy Cross. The citation reads as follows:

“For extraordinary heroism and conspicuous devotion to duty as Squadron Commander for Marine Fighting Squadron Two Twenty-One in action against enemy Japanese forces during the Battle of Midway June 4, 1942. Leading his squadron in a dauntless and aggressive attack against a vastly superior number of Japanese bomber and fighter planes. Major Parks aided in disruption the plans of the enemy and lessening the effectiveness of their attack, thereby contributing materially to the success of our forces. As a result of his courageous and daring tactics and because of the circumstances attendant upon this engagement, there can be little doubt that Major Parks gallantly gave his life in the service of his country. He displayed the characteristics of a fine leader and excellent airman in keeping with the highest traditions of the United States Naval Service.”

USS Floyd B. Parks (DD-848) was a Gearing-class destroyer launched on March 31, 1945 by Mrs. Floyd B. Parks, widow, and commissioned on July 31, 1945. Her home port was San Diego and she sailed for her first tour of duty in the Far East, patrolling the coast of China and operating in the Marianas Islands until her return to San Diego on February 11, 1947. She participated in the United Nations operations in Korea.

A memorial service was held in May 1945 for Major Floyd B. Parks, the first Salisbury boy killed in World War II.