St. Mary’s of the Angels – Wien

A Brief History of Wien, Missouri

Early Settlers
The first settlers of Chariton County arrived in approximately 1827, and lived somewhat south of what is present day Wien, in the Keytesville, and Salisbury area. Many of these settlers were of Irish and English descent and came from Canada, or from Kentucky and Virginia. Caspar Long was one of the earliest German Catholic settlers to arrive in the area (approximately 1853-54). He, and others, suffered the conflicts and fears of the bloody Civil War, which were especially frightful in Chariton County. Many other German settlers came to the area in 1872 from Lake County, Indiana. Casper Long, Anton Huber, Bernard Hoelzle, Bathasar Wehner, William Groetges, and Peter Ramback were early German settlers whose homes were utilized by Rev. Constantine Hergenrotter, pastor of Brunswick, (originally from Hafenlohr, Bavaria) to say Mass and give instructions on a monthly basis. Even when monthly services were not available, the settlers gathered together each Sunday and said the Rosary in common.

The First Church and School
As the little parish (originally in the Diocese of St. Joseph) grew from the original nine German families, plans were made in 1873 to build a log church. Land for the church and cemetery (originally on the west side of the main street) was donated by Anton Huber and lumber was donated by Casper Long with cupboards looked after by carpenter Kader. Each family helped with the work. A choir was organized. Other assignments were also made and included a janitor, mass server, and a person to ring the Angeles.

Mr. John Kaltenbach Stephani, a student from the Franciscan Monastery in Quincy, Illinois was hired for the teacher and about 20 children received their first schooling in the home of Anton Huber.

The Franciscan Friars
From 1874 to 1876, Rev. Fr. Tuit of Brunswick came monthly to look after the parish, with Fr. John Joseph Hogan also visiting in 1875. In 1876, Rev. P. Franciscus Moening, OFM, was sent by the newly ordained Rt. Rev. Hogan to see about starting a Franciscan House, which was established at “Mount St. Mary’s, Wien MO. (The town received its name of Wien (which is German for Vienna) from an Austrian by the name of Adelbert Seemann, and the town was officially established in 1876.)

The Franciscans were given responsibility for all the parishes in Chariton County beginning in December, 1876, and by January, 1877, Rev. Moening was joined by another Franciscan priest to help in serving the needs of the area. The two priests served all of Chariton County via horseback, including the parishes of Brunswick, Kelly Settlement, Hager’s Grove, and later on, also Hurricane Branch. At first the priests and three Franciscan Brothers lived in one little room in the home of the Hoelzle family which served as a studio and bedroom.

The building of the Monastery and first part of the church was designed by Brother Adrian Wewer, O.S.F. and was begun in the summer of 1877 and the corner stone was laid for the new church on June 24, 1877. At that time, 39 were confirmed and many guests from the Quincy Monastery were present.

Many Societies and Sodalities were established during the Franciscan years (1877 through July 1, 1914) to foster the spiritual development of the surrounding area. A number of young men and women entered the religious life during this time, and also in later years. 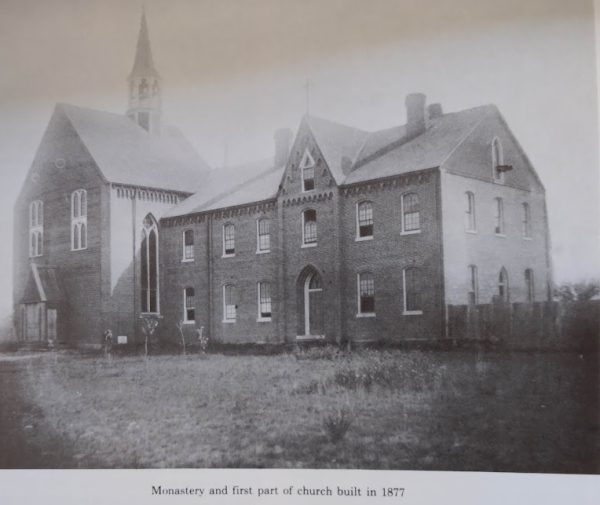 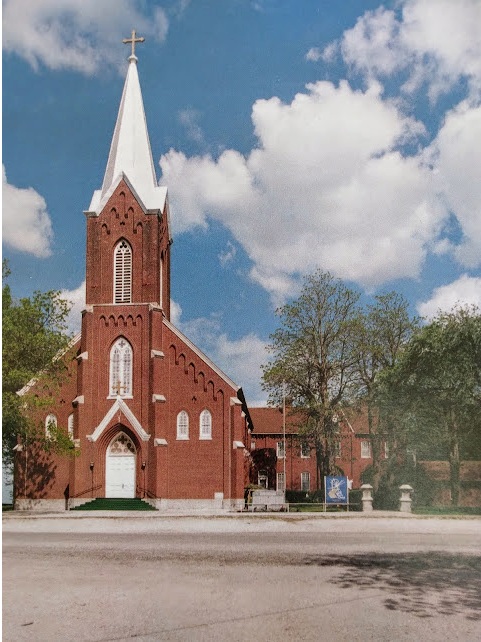 School History
After the brick church was built, school was held in the old log church. As enrollment increased, a new frame school was built west of the church by Brother Bruno and Henry Kanngiesser. An additional room was added during Fr. Guido Knepper’s pastorate (1888-1895). John Kaltenbach Stephani and Brother Irenaeus Krasus OFM, were the teachers, and then Brother Irenaeus Kraus OFM had charge of the school for almost five years until it was given over to the Franciscan Sisters from Lafayette, IN in about 1890. The two teachers and housekeeper initially lived in the house north of the church which was built by August Hinsen.

When the new brick school was built in 1911, three rooms were occupied by the sisters, and it was a “public school”.The Benedictine Sisters of Atchison, Kansas began teaching in the parish school in 1923, and continued until May 1969 when the Sisters were withdrawn and the school closed. With the Sister’s help, the laity was trained for teaching religious classes.

The parish continued to use the school hall for annual picnics until the Multi-Purpose Building was completed in 1983. In approximately 1988, the old school rooms were utilized for “recycling” purposes. Share ‘N Care, as the operation is called, was started as an effort to send used clothing to those in need, and continues to provide a means of sharing used items with others, less fortunate or not.

The Present Church
The second part of the present church was begun in 1891 when the first part of the church could no longer contain the 70 to 80 families that attended Sunday Mass. Much of the work (as on the original part of the building) was done by local families. Every family donated one load of wood for the burning of bricks which was managed by George Haas from Brookfield on the land 3/4 miles southwest of the church.

The painting and decorating was done by the Franciscan Brothers. On May 2, 1892, a great wind ripped off the unfinished roof with the walls and tower of the church suffering much damage. The roof of the carpenter shop was also blown 1/2 mile away. Despite these and a few other mishaps, the church was dedicated by Bishop Hogan on the feast of St. Francis, October 4, 1892.

The church bells were ordered shortly after 1895, with the largest of the bells being named Elizabeth. Both bells were purchased from the Stuckstede Firm in St. Louis, and “Elizabeth” took a tumble on the way home from the New Cambria train station, however, no damage was incurred.

Since the dedication in 1892, Our Lady of the Angel’s Church has been refurbished only a few times. Complete repainting was completed in 1939, and again in 1963. During Fr. Starman’s pastorate and in conjunction with Vatican II changes, major renovations were completed including moving the main altar to face the congregation, removal of the communion rail, and repositioning of the pulpit and many of the statues.

Wien Cemetery
In approximately 1899, the present day cemetery was donated by the Hoelzle family and blessed by Bishop Hogan. The remains of the old cemetery near the log church were then transferred to the new cemetery which was exactly the distance away from the church as the saying of the Rosary by persons on foot. This distance was considered in setting up the cemetery to allow for the funeral procession through the field.

Ecumenical Brotherhood
In 1964, Rev. Joseph Starmann became pastor of Wien and organized the Brotherhood of Christian Unity, an ecumenical group to promote Christian Unity through prayer. At one time, there was a Syrian Orthodox priest, an Episcopal priest, a Catholic layman, a Roman Catholic, and an evangelical minister participating in the group. The minister was later found out to be Frederick Waldo Demara, “The Great Impostor”. The group was disbanded in 1966 after notification from the Vatican.